ENGLAND’S World Cup hopes got a double boost yesterday as Harry Kane was declared fit to start against the USA and Harry Mane arrived in Qatar.

The Sun’s mascot rode in on a camel to roar on the Three Lions ahead of the vital Group B clash.

And along with every other fan, he was over the moon as Gareth Southgate confirmed his near-namesake had overcome his injury scare.

Southgate, 52, said of striker Kane: “He came through training, no problems. It would be a brave decision to leave him out.”

The manager also praised Prince William for backing England as he told how the team were on their way to becoming world-beaters.

Southgate said: “This is a good period for English football. We feel we can be competitive for many years to come.

“These players are putting the country on the map, they are regaining our respectability on the world stage and we have got to keep doing that.

“We’re tucked away, we really like our base camp, we don’t have TVs on other than for matches.

“I’m sure the lads are following social media but we have talked about the importance of ignoring those things. We actually had the future King come in and talk to the lads about that.

“You’ve got to just ignore the noise. It’s all about focusing on the games and on the training.”

Most read in The Sun

Southgate stressed his young lions would not be complacent against the USA, who we have never beaten at a World Cup.

He said: “What we have got to do is perform on the field and we know we will play a highly motivated team and perhaps even more motivated because of those types of headlines.

“But we have got huge respect for our opponents.

“We have got to be at our best and the risk for us is because we played well the other day [we think] we can just go through to the next game.

“We have got to find that reset button so we can have the same psychology and determination — and I do see that in the players.”

A fired-up Kane will be leading the line after being declared fully fit.

The Spurs star was subbed during the 6-2 win over Iran with an ankle knock. Meanwhile, pictures emerged yesterday of Kane, 29, wearing a £535,000 rainbow watch despite the Fifa furore over the symbol.

He led the squad into the Khalifa International Stadium before the Iran game with a Rainbow Rolex.

Instagram account Insane Luxury Life shared a snap of the timepiece, previously worn by Stormzy at the Brit Awards in 2020.

England will be cheered on by more than 8,000 lionhearts for tonight’s crunch game at the 69,000-seater Al-Bayt Stadium in Al Khor.

Another win will guarantee a place in the knockout stages. Around 3,000 fans who flew out for the game will be bolstered by thousands from the region’s 120,000-strong expat community.

Among those cheering England on will be Harry Mane, who cruised in on camel Mustafa yesterday.

Our mascot said: “He didn’t have much to say. I think he had the hump because Qatar lost. I was hoping he would stick his neck out and go for England.”

The USA has sold around 4,000 tickets to their fans, who celebrated Thanksgiving in Qatar yesterday.

Ashley Brown, of the Football Supporters’ Federation, said: “There were probably around 10,000 England fans for the game against Iran. So many of the people living here have decided to support England. They have the shirts on and fly the flag.

“It is because there are so many UK nationals living in the Middle East. And the popularity of the Premier League also means many locals are supporting England.”

Back home, fans are set to sink 20million pints as pubs prepare for one of the biggest nights of the year. Around 18million are expected to be watching, with many bunking off work early to get a prime seat ahead of the 7pm kick-off.

Shopping centres and retail parks, hoping for a bumper Black Friday, are likely to be deserted.

US fans are trying to incite England rivals with a feeble chant: “It’s called soccer.”

They insist that is how the game should be known — despite it being football to most of the rest of the world.

The Yanks, who insist football is throwing a ball around a gridiron, will try their soccer chant at today’s crunch game.

One even mocked up the slogan on star man Christian Pulisic’s shirt on Twitter. 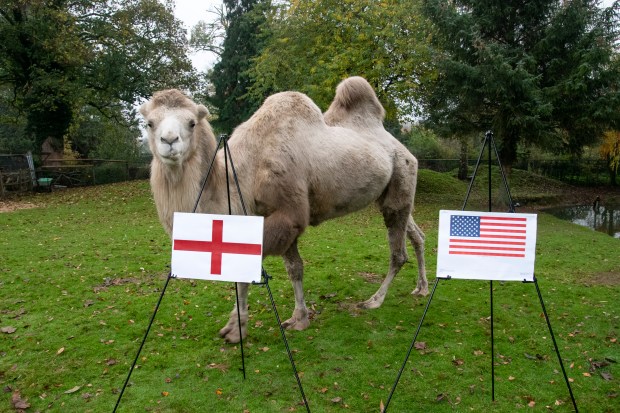 CAMILLA the psychic camel says lump your money on England by predicting a Three Lions win over the US tonight.

Also known as Mystic Millie, she picked the St George’s Cross when asked to choose between the two nations’ flags.

Louis van Gaal hugs Senegalese journalist after heart-warming comments in press conference and is told ‘you are in my army’ in hilarious Manchester United...

What TV channel is England vs USA on? Free live stream and full talkSPORT coverage of World Cup 2022 clash at the Al Bayt...